It looks like SH Tutti became a shooting star in immersive art. Her concept is to create art by modeling basic prims, adding pieces made by others so to combine them in a playful and colorful way. Within a few months of her short existence she got many calls and grants. Some might call her style Kindergarden art because it is so playful and colorful. However, I was correct when I predicted in Expo-Time! she would find success when she applied for 1Biennale. Let’s see the public vote if little Nomi will find some admirers.

In 2011 I announced the start of a three year project to conserve prim-based art by 2014, and was able to bring this 10 year epoch [2003-2013] to a close. Prims are the basic forms used by avatars when creating things. Prims are: Box, Cylinder, Prism, Sphere, Torus, Tube, Ring.

When starting 1Biennale I thought that the prim-epoch was history as most builders of sculptures have moved to Mesh, use Blender or other tools to construct a wireframe and then import it to a virtual world. Then SH Tutti came [born-digital in Sept, 2017], got on the spot 10 art shows and applied for 1Biennale.

SH Tutti made everything out of prims. She offered as her 1Biennale cube a work she was about to create reflecting Niki de Saint Phalle’s Queen Califia’s Magical Circle, which you can find in Escondido, California. She said she spoke with the city council and the granddaughter of Niki might hold the opening speech, but I did not want to risk a dispute with the Niki Charitable Art Foundation. So it came to Tea Time with Tutti.

Her artist cube is placed in Bryn Oh’s Pavilion: The Long Legged Maskitts. It became a key part of the Grand Opening. 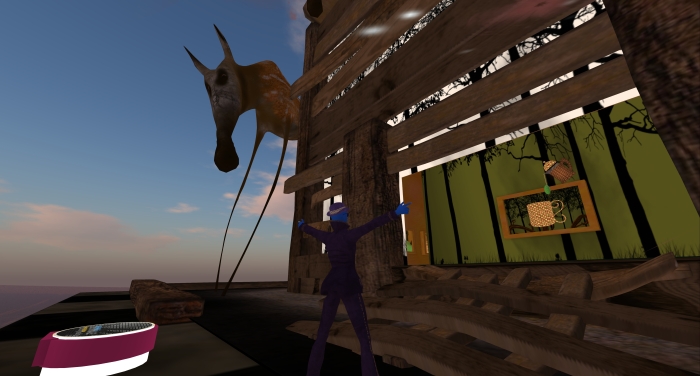 But that’s cold coffee now. SH Tutti got a LEA grant and support for her project “The Niki Garden” by Niki’s granddaughter.

Welcome to the website of the 1st Digital Biennale. 1Biennale is a milestone in Digital Art.

For 1Biennale 2018 Art Blue transfered the historic concept created in Venice in 1894 to virtual worlds and invited artists to create Pavilions and Artists Cubes to be set inside.

You need an Avatar to visit the works in the way they are meant. The book 1Biennale: Living in a Coded World gives a complete picture of this form of art and shows all contributions.

The press conference and public view for the first 1Biennale has been on September 17, 2018 at KW Institute for Contemporary Arts in Berlin.

1Biennale is the contribution to the Digital Section IMMERSIVIA of Santorini Biennale 2018.

Applications for 1Biennale 2020 are welcomed.