UPDATE: THE CUBES ARE DONE …

“It all starts with a Cube” is one of the most quoted phrases when it comes to virtual worlds. So let’s keep it this way when virtual goes real. Virtual went real in the 3rd edition of the Santorini Biennale in 2016. Now time has come to extend, to let virtual art expand.  In The Expanse, aired on Netflix in 2017, mankind has settled on The Moon, on Mars and The Belt. A very visionary part from The Expanse is quoted in Not Sand, Not Sound when Miller meets The Salesman in the chapter Start to Hoover:

Let me share with you a conversation between Miller, the ex-cop, and “the Salesman” from the show, The Expanse, when Miller is traveling to Eros:

Salesman:  You just looked a little nervous, that’s all. You know, if you identify the fear, you can get past it. And then you get used to it. I’ve been flying once a month for the past year and a half.

Salesman: No, I’m, uh. I’m preparing myself for the Nauvoo.

Salesman:  Yes. A different kind of salesman. But don’t hold that against me.

Miller:  Well, there was a time when I would’ve.

Salesman: But not anymore? Uh. Forgive me for saying so, but I don’t get the impression you’re a man who’s accepted Jesus Christ into his heart.

Miller:  I guess I’m just not that desperate.

Salesman:  We all are. If we’re being honest with ourselves.

Miller: Let me ask you something. You guys are gonna get on this big ship, you’re gonna ride out into the great beyond for 100 years. What happens when you get out there… And there’s nothing. That big planet you got picked out, it ain’t worth a damn. I mean, nobody really knows what’s out there. You can’t come back.

Salesman:  Well, you’re right about not coming back. But if that is the case, God has just revealed to us that we haven’t finished our search yet.

Miller:  Doesn’t that scare the shit out of you?

Salesman:  Yeah, of course it does. But I put myself in the hands of God. True faith is a risk. You know, and with great risk comes… [ … ]

Miller says: “You guys are gonna get on this big ship, you’re gonna ride out into the great beyond for 100 years. What happens when you get out there …”

Become one of these guys and build a cube of Art that will be taken care for 100 years. You ask is this travel realistic? It is as you can watch out here:

What is new, what is different to The Surreal Cube that was presented at the Santorini Biennale 2016 [see the machinima above by WizardOz Chrome] or The Surreal Tower, an Art project supported by Linden Endowment for the Arts by a core grant given in 2015?

The Cube is dynamic rezzable (movable), the cube is inside a Pavilion, the cube has an entrance (12×6 meter max.), the cube is not too big (a little smaller then 32x32x26 meter). Each cube represents one artist – or a small group of artists if they like to self arrange themselves in a team. We call this cube an Art Container.

DYNAMIC REZable ~ uses a technology in opensim to load regions or part of regions so the visitor gets the impression of a world change by standing inside the world.

DUAL SIM ~ the visitor stands on the edge of one sim (world) and looks out to a neighbor sim that changes. This concept was first used in Gem Preiz installation “The Cathedral Dreamer” in Metropolis grid in 2014, published in rez Magazine.

DUAL WORLD ~ art created for avatars is also shown in special places like Lost Spaces or in galleries, museums, exhibitions and events like the Santorini Biennale.

OUT OF SIM ATTACHMENTS ~ a holder prim or an avatar standing in a frozen pose holds artworks reaching to a neighbor sim.

METAHARPERS ~ a programmed camera flight made individually for each cube.

METACAM ~ a pre-programmed camera menu – or flight – for a third person view.

The Cube is like the green box (but a bit smaller then 32x32x26 meter on a reason you will understand later) . The entrance has a maximum of 12×6 meter. The Pavilion makers will place no objects there that might become an obstacle. This said, you as a Cube Art Content maker can create a small door (or 2 doors as well) – as long as in total the dimensions go not over 12 meter in width and 6 meter in height.

The Pavilion has all the space around, reaching 54 meter and can have a Grand Hall that is around your cube fitting like a glove. The height of the Pavilion might reach over 28 meter. Your Art Container might not be seen from outside as this depends on the Pavilion it will be set in. The Pavilion can have a very solid style, like in the The Surreal Cube machinima or can have an airy style. There are many variations possible. For a beginner, and a content cube maker might be one, just take the sample cube “the always inside container” sized 31,94×31,94,25,94 with walls of 0,05 meter and start …. 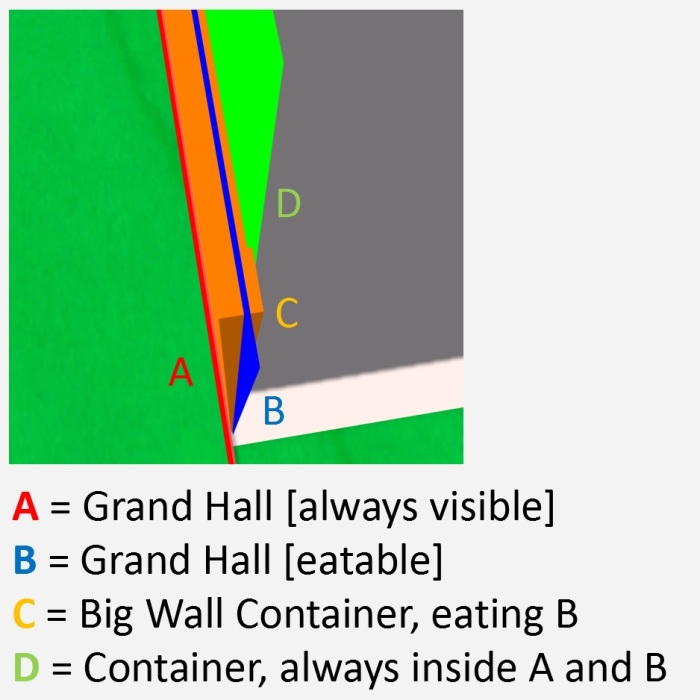 Welcome to the website of the 1st Digital Biennale. 1Biennale is a milestone in Digital Art.

For 1Biennale 2018 Art Blue transfered the historic concept created in Venice in 1894 to virtual worlds and invited artists to create Pavilions and Artists Cubes to be set inside.

You need an Avatar to visit the works in the way they are meant. The book 1Biennale: Living in a Coded World gives a complete picture of this form of art and shows all contributions.

The press conference and public view for the first 1Biennale has been on September 17, 2018 at KW Institute for Contemporary Arts in Berlin.

1Biennale is the contribution to the Digital Section IMMERSIVIA of Santorini Biennale 2018.

Applications for 1Biennale 2020 are welcomed.